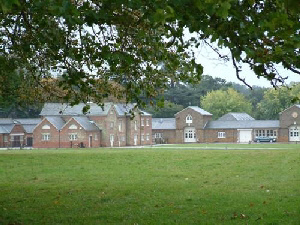 There is a connection between these three pictures: the sign in New Zealand near Matamata, Bloomsbury Square Gardens in the sun at lunchtime, and the stables at Woburn Abbey. The connection is the Duke of Bedford.

You will remember from your high school history that the Duke of Bedford was a prime mover in ensuring that  Elizabeth I succeeded to the throne and he was there in the front row when she was crowned. This rather loose-knit family includes the Russells, Churchills and Spencers – as in Bertrand, Winston and Diana.

Woburn Abbey in Bedfordshire is the family seat and a story is told about a walnut tree in Chenies, Bucks, which was planted from a nut that fell from the branch upon which Henry VIII hanged the last abbot of Woburn. You will remember, too, the Bloomsbury Group of the early 20th Century, they used to meet in the Bloomsbury Square area – Virginia Woolf the author, Keynes the economist – the intellectual stimulus of the area drew them here. Just over the back of the gardens is the British Museum, a couple of streets away is the Gt Ormond Street hospital, nearby is the Shaftsbury Theatre. The University of London is here, as is the School for Oriental and African Studies. Look for Great Russell St, Woburn Place and Isaac D’Israeli. Finding Bloomsbury is easy – walk up High Holborn, turn right into Southampton Place, cross at the pedestrian crossing and walk into the gardens. Stand in the gardens a moment and observe – a wonderfully eclectic crowd passes you by: tourists and intellectuals roam the museum while students from the university mingle with the strays of St Giles. Look for the group clustered on the steps of the English Language Institute, and stroll the lovely tree-lined vista of Bedford Row to admire its beautiful four storey brick apartments now turned legal chambers. Mind you, they do back on to Gray’s Inn, so it’s no wonder the lawyers took them over. Much of the area lies within the Borough of Holborn, so it’s nice to see street signs that make you feel at home – so much cosier than Camden and Westminster.

The horse studs in Woburn and in Matamata are the same – the family spends six months in the sun in NZ and then the same again in England.