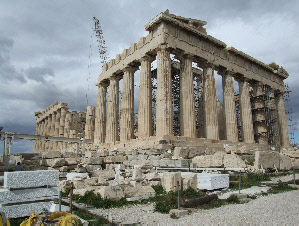 A week in Athens in mid February is a fairly good time to go – the weather is generally mild, and there are some sunny days. There are no crowds, the Greeks are polite and helpful, many speak English, and their cooking is often incredibly good, even in very simple premises. This, below, is the 19th Century Church of St George, with a very large silver icon of our national hero, and a muted, quiet, contemplative atmosphere inside. To the right is its spectacular setting on a hill accessible by funicular railway after a long, hot climb through narrow, picturesque streets. In the middle of Athens is the remarkable Church of St Dionysius, the patron saint of Athens, with twin towers, a huge dome, and some lovely icons. This young woman, left, was up in the roof on restoration work. We walked around the crowded, sometimes intimidating streets of the 7-day Flea Market. This chap, right, was running a small furniture store. Nice little place, too. When in Athens of course you visit the Parthenon. Take a walking trip around the Acropolis and you can see two major outdoor theatres, Ancient Agora, Roman Agora, Hadrian’s Gate, the Temple of Athena Nike, and, of course, the Parthenon and its museum. Definitely worth 12 euros. These spectacular and beautiful statues, are part of a temple on the Acropolis called The Erechtheion. They are not the originals, of course, which are in museums, but they are excellent reproductions. In the midst of Ancient Agora, at the foot of the Acropolis this beautiful temple, left, called The Theseion, sits grandly on a small hill by itself – absolutely gorgeous in the sunshine. Ayios Eleftherios, a tiny 11th C church next to Athens Cathedral. We lit a candle here because the interior was just beautiful, even though quite simple. However, the Greeks have a particularly disconcerting habit of removing the lit candles quite quickly and throwing them in the rubbish. Your candle may be lit, but it won’t last long. This monster face, mounted on an empty fountain, was part of a group of attractions in front of Syntagma Metro Station. The celebrations were part of the Carnival, a lead-up to Lent. Behind Syntagma station are Parliament Buildings, which you can see in pink marble behind the creature above. At the foot of the buildings is the Tomb of the Unknown Soldier. These two soldiers, right, guarded the monument. Tomb of the Unknown Soldier

From the ferry to Aegina, I saw this great sight, left, of a ship approaching the entrance to Pireaus Harbour.