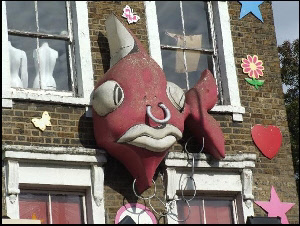 Strictly speaking, Camden Lock isn’t in our neighbourhood at all, since you can’t walk there and back in your lunch hour. However, many of the street signs around here say that parts of Holborn are in the Camden Borough, and if you use the Tube, with a couple of changes, from Chancery Lane to Camden and back, you should do the round trip well inside an hour, with time to have a look at the sights.

Here is one of those sights. He is a character, isn’t he, fully in line with other tattooed, bespangled, leather-clad lads in the Camden Lock Market. Nice chap, too, munching on his enchilada and talking to his Goth girlfriend who was as tattooed, pierced and silver-ringed as he was. Below is the front of the PunkyFish on Chalk Farm Rd. Many of the shops and arcades in Camden are highly decorated like this. Lots of them have movement as well as this 3-D effect. The traffic in Camden High St is as dense and loud as anywhere in London.

There are about a dozen large street-style markets in Camden, and they say there are over 700 stall-holders. I believe them; Camden is a market paradise. There is even a shop on Camden High St selling leather and chains called Amsterdam in London, in the fond belief, I suppose, that Amsterdamers drape themselves in leather and chains, perhaps just like the Camdenners like to do. Camden Lock itself, below, is on Regent’s Canal. You can follow the towpath 2 ½ miles all the way through London Zoo to Little Venice, but not in your lunch-hour of course.

On the opposite side of the lock in this picture is the Camden Lock market. We had a great time exploring here. Lots of noise, food, clothes and jewellery.