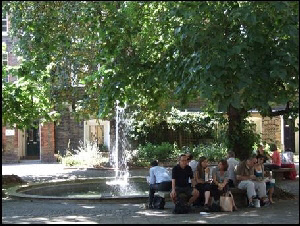 I’ve mentioned Dickens a couple of times so far – his “club for tom cats” jibe at Barnard’s Inn, as well as his use of what is now Nancy’s Steps on the Bankside end of London Bridge, and soon you’ll see what he had to say about Staple’s Inn. Near Union St in Bankside there is Copperfield St, the Dickens primary school and the Charles Dickens pub. He came from Chatham and lived in Rochester, where he set some of his novels, but he also lived and worked in Holborn. There is a Dickens House and Museum in 48 Doughty St WC1, just off Grays Inn Rd , where he lived for two years. While there he finished the Pickwick Papers and wrote Oliver Twist and Nicholas Nickleby. To remind himself of his roots, he installed a grille from the Marshalsea Prison where his father was imprisoned for a year for debt. There’s also a Dickens House at 15 Took’s Court, behind Furnival St, but I can’t find out why. Just behind Holborn Tube station is the Old Curiosity Shop. It’s a Tudor building and if it was thought old in Dickens’ time, then it’s 100yrs older now. Why someone would want to sell antique shoes is beyond me, but that’s what the owner does. A very quiet little street in the middle of the London School of Economics (LSE).

His first job on leaving school was as a legal clerk in Grays Inn and he chose that office as the set for Mr Phunky in one of the Pickwick tales. When he married he and his new wife lived in Furnivals Inn, which was demolished and replaced by the Prudential building on Holborn at the end of the 19th Century. This bust, left, and a plaque on the wall of the Pru, record Dickens’ stay in the former building. The picture below is of Wine Office Court, off Fleet St. Dickens uses it in A Tale of Two Cities, but it was a well-known lane on the route to see Dr Johnson, the poet, literary critic and lexicographer, whose house even now is signposted from here, as well as from New Fetter Lane. Dickens also visited the Old Cheshire Cheese pub in this lane. This picture below is of Inner Temple Fountain off Fleet St. Dickens mentions it fondly in Barnaby Rudge where “a vagrant ray of sunlight patches the shade of tall houses” and it’s a meeting place for Ruth and Tom in Martin Chuzzlewit.