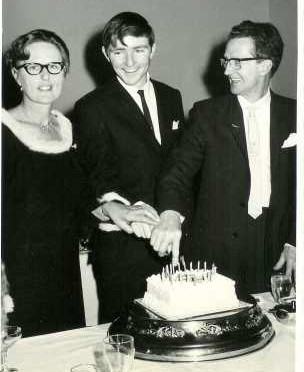 School Days. Glenholme Primary School, Rotorua. I’m 5th from the right, second row down. Nice school. The principal’s name was Mr Bassett. My friends and I spent an awful lot of time on our knees playing marbles in chalk circles on the asphalt, while other boys played rugby or soccer on the school fields.

I still know the names of most of the children in the photo above. The principal encouraged gardening, and he showed us how to grow and prune roses. I hitch-hiked to see Sadie one summer and this was the photo she took of me in her garden in Haumoana. She was so short she fitted under my arm, but she was very nice to me and I went fishing in the mouth of the Tukituki River not far away, whilst she had an afternoon nap. A boy and his dog. I was too skinny to go sailing and couldn’t hold the yacht upright. I took my dog to obedience classes and he got quite good at it. Dad made the gates in the background. My 21st. I didn’t know they were planning it and the occasion was quite a surprise. Doesn’t Mum look gorgeous – and young!

This is the inside of Sadie’s cottage, below, exactly as I remember it when I visited her. The picture above the mantlepiece is of Leonard Adams, a Navy man (a marine) who visited her when his warship the Renown, carrying the Prince of Wales on a voyage around the Colonies, called in at Napier and Wellington and he was allowed some time off to go and see her. He says on his copy of the sailing plan “Napier – Where I left to see Auntie. May 4th 1920.” The radio was made of black bakelite and she listened to the BBC six o’clock news every day, as she had during two world wars. She knitted peggy squares for the New Zealand Red Cross. These were 6-inch squares of knitted wool, which could be multi-coloured, and were made entirely from garter stitch. Someone dropped off the wool she was to knit, and came back in a few weeks to pick up the finished squares. Other volunteers sewed the peggy squares into blankets for the needy. Thousands of New Zealand women knitted them – my mother did from time to time – and the project seemed to have its origins in the Great Depression of the 1930s. Sadie was knitting them both times I visited her, and she told me hers were going to London. She must have made thousands of them.