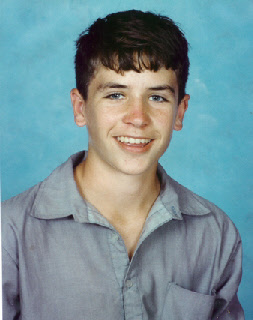 This little plaque in the Hamilton Lawn Cemetry, Newstead, marks the grave of my own son, Jason Gordon Tearle, born 3 Jan 1979 in Hamilton NZ. He was helping his school raise funds for a tour of England to play cricket. One of the venues was to be Rugby School. He was struck by a car and tragically killed. His school, Hamilton Boys High School, commissioned a memorial called the Jason Tearle Memorial Trophy, which is awarded annually to the best all-round Year 10 student in the school. To date almost every recipient has gone on to become Head Boy. While he was actually born in Waikato Hospital, in Hamilton, Jason was a son of the Waitomo District, in the King Country. Here is his memorial on the window of the Millennium building in Te Kuiti, NZ. We met the first of our English relatives in the summer of 1993, when John and Corinne Wallace came to see us with photos and news of Levi and his family. John took this photo of Jason, and taught him a few things about cricket. This visit was the beginning of our association with our English family and was the inspiration for Jason’s desire to go to England on the cricket trip. John’s mother, Sheila, was one of the three women who came to see us late in 1994 and to plant the walnuts from Wing in the story I have told on Thelma’s page. Jason during John and Corinne’s visit

Jason had a very good sporting and academic record. He played soccer and cricket for King Country and was capped for his role in a King Country v Taranaki tournament in Taupo. At HBHS he was in the choir, he was learning the guitar, played soccer and he was, of course, selected for the cricket squad to tour England. He was in the the first five in all of his academic subjects and, as the Headmaster pointed out was “A good kid.” It was because of his all-round excellence that the school determined to remember him with a major school trophy, named in his honour, and given to a boy who has those qualities. She told us that Jason would probably have gone on to be Head Boy, which is why she is not surprised that most of the recipients of the trophy have done so. The last photo of Jason, 2 weeks before his death

Elaine is tending the two seedlings that grew from the Wing walnuts. One of them was planted out on the farm with a service by Rev Fred Day of Te Kuiti, conducted in Latin.