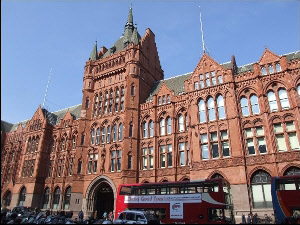 Picture this at the turn of the last millennium – around 1000 AD. You are sitting on a high branch of a tree growing in the middle of Holborn Circus and looking to the west, up High Holborn. The Hole Bourne Stream runs through the area and empties into the Fleet River, over to your right, which joins the Thames at Blackfriars. The City wall, built by the Romans, is just on the other side (from here) of the Fleet, with an imposing entrance called Ludgate. Most ordinary Londoners speak the East Saxon language, in common with the Essex villagers who live in the area from here to the mouth of the Thames.

There is a large cattle market by the stream which overlooks a few small lakes. A track wanders through the lakes, giving the locals access to the market. The de Grey family builds a nice house here, just outside the City, and they call it the Manor of Purpoole, referring to the market near the lake. Around the city wall to the north from here, there are swamps and rough country – caused partly by the wall itself. There are wild boar and deer in the woods that you can see from your tree, some cattle graze on tree-lined paddocks and corn ripens in fields cared for by tenant farmers. To the south of the Thames you can see the dense smoke of the brick-makers’ ovens. Skip a thousand years and look around from your tree branch high above the Circus. The Hole Bourne stream has been buried but the name has survived, mangled to Ho’b’n and we spell it Holborn. If you listen carefully, you may hear the locals say the L, even though it isn’t actually pronounced. The cockneys of London are the direct inheritors of the East Saxon language used so long ago.

The Prudential building (above) now sits where the market was, the Fleet River is in a culvert under Farringdon Street and the Purpoole name is preserved in Portpool Lane that joins Grays Inn Rd to Leather Lane. The roads and streets of London follow the the hedgerows and pathways of those ancient paddocks and fields while the deep deposits of clay to the south of the Thames have been used to make millions of bricks for London’s yellow-brick buildings.