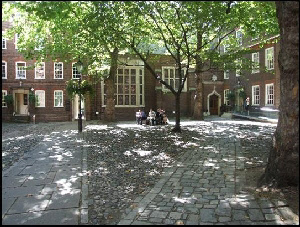 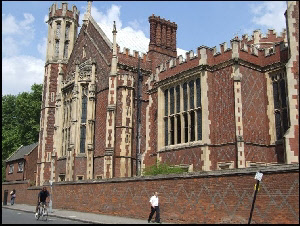 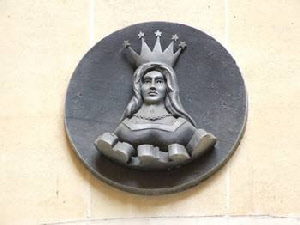 This is the entrance to the Hall of Barnard’s Inn. A beautiful, fascinating little courtyard with old date stones, a story on the wall, the coat of arms of the Baden Powell family – and this glorious, small Hall. The Hall itself dates from the late 1300s, but in a chamber beneath, the southern wall is chalk and tiling from the Roman period, 2000 years ago. In 1252 the estate was recorded in the property of the then mayor of London Sir Adam de Basyng, and in the mid 1400s became one of the Inns of Chancery. Law students would enrol here for some time, then move on to Grays Inn, to which Barnards Inn and Staples Inn were associated. It’s a strange place; to get to; from Holborn Circus walk up Holborn, cross Fetter Lane and look for the Barnards Inn archway on your left, with a Gresham College sign. Go boldly down the short alley and it opens out into this courtyard. Young couples sit here eating their lunch and on a sunny day the courtyard is warm and cosy, with historic carved stones set into the walls and an interesting story about the Mercers’ School carved into a large slate. After you have explored the courtyard you can move onwards under another arch into an altogether more modern courtyard, left, then beyond that again, back onto New Fetter Lane. It’s hard to tell you have almost turned back on yourself. In Dickens’ time, Barnards Inn had fallen badly into disrepair and in Great Expectations young Pip came to London and found “Barnard to be … a fiction, and his inn the dingiest collection of shabby buildings ever squeezed together in a rank corner as a club for tom cats.“ In the 1890s the Mercers’ Company renovated the building and moved their boys school here from College Hill for about 60 years, closing in 1959.

The whole site has been purchased by Gresham College and you can now attend free lectures here, in this lovely Hall, at lunchtimes or about 6pm, mostly on Tuesdays. The Gresham Professors were set up in the 1500s and studied and taught the following disciplines: Astronomy, Divinity, Geometry, Law, Music, Physic (medicine) and Rhetoric. Even today the lectures follow the same themes – great topics, though – “Mathematics in the modern age – The 18th Century; Crossing bridges” and “Handel and London” and “Should we take our leaders as seriously as they take themselves?.” 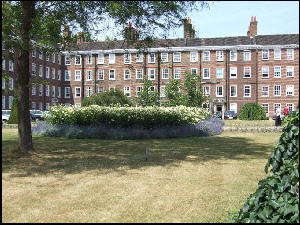 The Inns of Court are ancient institutions and as you walk around our neighbourhood you’ll see signs of them: Staples Inn, Clifford’s Inn, Furnvials’s Inn, Barnard’s Inn, but there are four really famous ones – Lincoln’s Inn, Inner Temple, Middle Temple and Gray’s Inn. They have a serious teaching function, but many of their buildings are also occupied by operating legal chambers. You join one as a law student and through them, you get “called to the bar” ie become a barrister. Not everyone who joins an Inn becomes a barrister, or even wants to, but there are few other ways to become a lawyer, and none (until 2004) if you wanted to be a barrister. If you walk up High Holborn to Chancery Lane tube station, you will meet Gray’s Inn Rd at the lights. Cross the road and then just past the Cittie of Yorke pub, turn right into Warwick Ct  – you’ll miss it if you blink. At the end of it, through an imposing arch, is an entrance to Gray’s Inn. These are the arms of each of the Inns and the notice “School of Law.” Gray’s Inn has the gold griffin on a black background.

Famous people associated with Gray’s Inn? Queen Elizabeth I was patron and “a loving glass” is still raised to Good Queen Bess. Shakespeare performed his plays there, and part of a captured Spanish galleon has been made into a wooden screen in the Hall. Thomas a’Becket was chaplain of the chapel and he occupies the centre of the stained glass triptych behind the altar. Sir Francis Bacon was a member as was Winston Churchill and Franklin Roosevelt.

The Walks, as the gardens are called, were laid out by Sir Francis Bacon and much of what he did endures. Verulam Buildings on Gray’s Inn Rd were named after him. Almost all the buildings were destroyed by German bombs in WW2, but a few choice buildings survive.

At the entrance to Gray’s Inn you’ll see a nice bronze relief of Sun Yat-Sen, who overthrew the Manchu dynasty in China in 1911. You could say “We taught him everything he knew…”