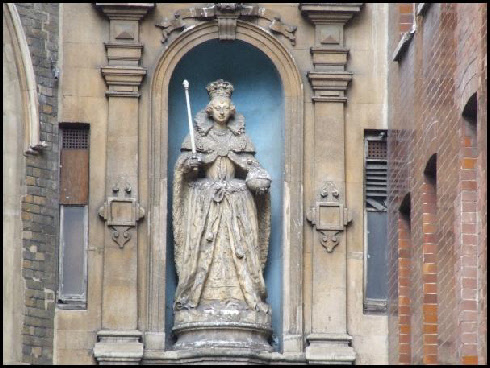 I like to go for a walk at lunchtime and recently I have taken to stalking Fleet Street. This rather beautiful statue of Queen Elizabeth I, below, that I found in a little alcove of the church of St Dunstan-in-the-West caught my attention. The carved stone underneath said the statue had been removed from Ludgate and placed here, in Fleet St, in the 1750s. This is the only statue of the queen carved in her lifetime and I have seen the Ermine Portrait of her, in Woburn Abbey, painted at the time of victory over the Spanish Armada, and it seems a good likeness to me. Ludgate was one of the gates in the old London Wall demolished in the 1760s because it was in the way of City traffic. There is a blue plaque on the wall of St Martins on Ludgate Hill and the gate must have crossed the road there and given entrance to the street leading directly to St Pauls Cathedral. The sight must have been breathtaking; actually, it’s still pretty inspiring. Ludgate is named after King Lud, as indeed is the city of London itself. It was named Caerlud (city of Lud in Gaelic) which was corrupted to Caerlindein over time and was Latin-ized to Londinium by the Romans. He was a legendary king in the 70’s BC and was buried on what is now Ludgate Hill. Inside St Dunstan’s is a notice directing you to the three statues of King Lud and his sons, which had been removed from Ludgate when it was demolished. I found them in the church porch immediately below Queen Elizabeth, nicely out of the weather, but still looking fairly hard worn by time.

While we are at St Dunstan’s, cross the road and have a look at its clock. This clock dates from the 1670s and is the first public clock in London to have a minute hand. The two giants that accompany it hit the bells and swivel their heads. Hang around – it’s worth seeing. You will find the sign indicating the site of the demolished gate, on the wall of St Martin-within-Ludgate on Ludgate Hill, opposite Thameslink City Station