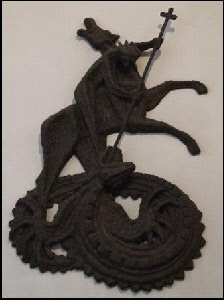 The Norwegians arrived in Britain some time after the Saxons (who were invading as the Romans left) but they had a roughly similar language, which was probably the same Germanic language in the distant past. Along with the Danes and the Swedes, they were together called the Vikings and they arrived in England in large numbers after 800AD, setting up almost their own country, called the Danelaw, which was dismantled by William the Conqueror after his invasion of 1066. Viking history and its deep and lasting influence in England is worthy of study; the Danelaw, for instance was all that area east of Watling Street (the A5) from north of London, so Yorkshire, Lancashire, the Lake District and Lincolnshire, as well as Scotland, owe much of their local accent and dialect to the Vikings, while father, blackmail, egg, knife, crooked, window and ill, are some of the words we still use from the Old Norse. Look up your Oxford English Dictionary for more.

In Holborn you can easily walk to see evidence of the Vikings because if you cross London Bridge, descend Nancy’s Steps and then go to your left under the bridge, you will see St Olaf’s House and a sign on the ground for St Olaf’s churchyard. In an unsuccessful attempt to capture London, King Olaf invaded from the Thames and pulled down London Bridge in 1009. This is believed to be the inspiration for the children’s rhyme “London Bridge is falling down.” Mind you, it was a wooden bridge so it was subject to fire and flood anyway and had been rebuilt several times before.

Which brings us rather circuitously to the picture of the Christmas tree below. Every 7 Dec, a representative of the Norwegian government (last year it was the Crown Princess of Norway) turns on the lights for the Norwegian Christmas Tree in Trafalgar Square. The tree is presented to the Mayor of Westminster in a ceremony beginning at 1745hr. Last year was the 60th time this ceremony had been performed.

When the Germans invaded Norway during WW2, King Haakon VII escaped to Britain and set up a government in exile. This tree is presented each year in thanks for the assistance Britain gave to that government, and to the people of Norway. The tree itself is always a Norwegian spruce from near Oslo and is usually about 60ft tall and 60years old. It is felled in a ceremony attended by the Mayor of Westminster in Oslo during November and brought to London by ship free of charge. It is lowered into a hole 4ft deep, secured with a dozen wooden wedges and lit with only white lights, for snow.  Members of the choir from nearby St Martin-in-the-fields will sing carols around the tree every night until Christmas, and there will be a collection for selected charities as well. Those of us who went in the coach to the Accenture Christmas function last year will remember driving past the tree as it stood, scattered with its little white lights, in Trafalgar Square.

If you go to St Mary le Bow you will see there a bronze relief of St George slaying the dragon, which was a gift to the church in memory of the stirring sound of the Bow Bells, giving hope to many parts of the world, as they were played for each broadcast of the BBC World Service. Interestingly for an impartial news service, included in the broadcasts were coded messages to the Norwegian resistance.