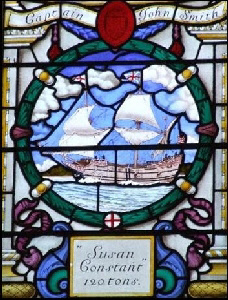 On 20 Dec 1606, Captain John Smith commanding the Susan Constant, with two other ships, the Discovery and the Godspeed, set sail for America on a charter from King James 1 to colonise part of the Chesapeake area for the Virginia Company, arriving at Jamestown Island on 13 May 1607 with 103 settlers. Wed, 20 Dec 2006, marked the 400th anniversary of the day they left London. The stained glass window below is in the church of St Sepulcre, opposite the Old Bailey, parish church for Captain John Smith.  Don’t get him confused with the Pilgrim Fathers, because that is a completely different story. I have a friend who lives in Virginia and they celebrate the day Captain Smith and the other ships arrived – 13 May 1607.

I have tried to find out the names of all the early settlers, but the ships’ passenger records show only the names of the captains, about 40 “Gentlemen,” 20 “Labourers” including the ship’s surgeon, “and diverse others.” Bad luck if you were a diverse other because now history has no knowledge of you.

Cptn John Smith was appointed governor of Virginia and under his structured leadership, the town prospered. When he left for England in 1609, they suffered their “starving time” winter when only 60 of the original settlers survived. Disease, failing crops and the attacks of the local Algonquian tribe heaped misery on the settlers. All of these, as you can imagine, are the products of poor management. This catalogue of disasters and mismanagement followed the township for the next 15 years. Eventually, the king became impatient with lack of progress, dissolved the Virginia Company and the the area became a crown colony in 1624. Once back in England, Smith wrote copiously about his life and adventures, making it difficult to tell fact from fantasy. He died in London in 1631. When you consider he was in America for only 3 years, he really has written a great history for himself.

Everyone has heard the story of Pocahontas, if only because of the Disney movie. Smith says the 11yr old girl saved his life when he was captured by the locals and sentenced to death. He wrote about her often and made her a real celebrity. She later married an Englishman, John Rolfe, and died of smallpox in Gravesend, London, aged just 22. She is buried there in St George’s church. I can’t show you a picture here because they are all copyright.

The ship that Smith captained, the Susan Constant, is pictured below from the stained glass windows of the Church of St Sepulcre. It took 4 months to get to America because of storms affecting these little ships. Below is a photo of the plaque marking Cptn John Smith’s grave. There is a notice in the church to say St Sepulchre was the last place he visited before catching the ship to America, as well as pointing out that he died in a house on Snow Hill, within a stone’s throw, and is actually buried in the church.

I met a Bostonian lady here who said Cptn Smith was regarded as the first American because, when he was mayor of Jamestown, trying to keep his new settlement viable, his motto was “If you don’t work, you don’t eat.”

This may come as something of a surprise, but Captain Smith was a member of the Cordwainer’s Guild. The Jamestown Foundation of the Commonwealth of Virginia (their words) presented a statue to the City of London and in 1960 it was mounted in the churchyard of St Mary le Bow, in the heart of the Ward of Cordwainer. The cordwainers were leather workers and merchants who bought their leather exclusively from Cordoba in Spain. This statue of the cordwainer at work represents the Ward of Cordwainer, where mostly shoemakers worked. Smith was not necessarily a shoemaker, but his father probably was, hence this was the guild he joined. Here are the other two ships that went to Jamestown on the same mission: The Discovery captained by Sir Robert Bertie, Earl of Lindsay, and The Godspeed, captained by Sir Samuel Saltonstall.