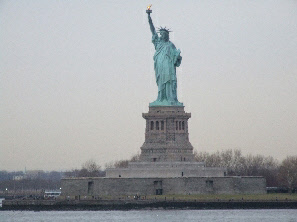 Everyone must go to New York at least once in their life. There are only two cities in the world that have a true, big-city pulse; London is one and New York is the other. They roar with urgency, power and wealth. I was impressed with NY.
A friend of mine said New York was in America, but it wasn’t an American city – it was just New York. New Yorkers (those we met in Manhattan, anyway) are very like Londoners – they sit quietly on the underground trains, somewhat guarded in their responses, enveloped in their little bubble, reading their paper, listening to their iPod, but they will have a short chat with you if you want to know the best way to get to somewhere in the city. They are polite, kind and will help if you ask.
We were living in the Tatham, a little hotel on the corner of 5th Ave and E28th, so Madison Ave (the corner right) was a very short walk away, as was Park Ave, the Empire State Building, and Broadway.
This lady pushing a pram was swept up by underground steam, which is generated by huge gas-fired stations deep under New York. Since the 1880s the steam has been  sold to heat Manhattan buildings. Our first day in New York was grey and cold, so we took a trip on the Staten Island Ferry from deep Downtown Manhattan. I was amused at the Subway – all trains go either Uptown or Downtown. Once you get the hang of it, underground travel is easy. The Staten Island Ferry is free and you go close to the Statue of Liberty. Did you know it stands on a gun platform? The holes in the base were where the gun muzzles stuck out. The second day was sunny so we walked. On the left is our view of Brooklyn Bridge from Pier 17 with a really cool view of autumnal New York in the background. We were very lucky to know friends in New York, and they gave us some tickets to see the city from the top of the Empire State Building. The view is vast, the air is freezing and the building shakes, hence this picture is not completely sharp. It took three hours of queuing; “No sitting!” shrieked Security. But that view… I took the picture of the massed taxis from the middle of the road outside the Metropolitan Museum of Art, while the lights were red. Traffic in New York is dominated by taxis, which honk their horns at every opportunity, and race at 40mph up and down the wide avenues, many of which are one-way streets. In spite of their mad-dash habits, they were polite to pedestrians and waited quietly while we crossed. On a rainy night we saw this sight of the Empire State building, right. We were staying in a hotel about 100m behind where I took this photo, along 5th Ave If a picture tells a thousand words, then here are 4000 of them. They are all of Central Park. I’m sure I have seen the bridge in the top left picture in CSI: NY, and in a few movies. The chap in blue was a street cleaner; Man on a park bench

and of course you have to browse a bit in the Central Park souvenir kiosk. Anyone want a New York Nicks cap? I’ve worked in banks, I had a short stint supporting Bloomberg and I have worked in London City for most of eight years, so the one place I wanted to see in New York was Wall St. I was amazed at how small it is! No more than a lane, with tall sides.
As you can see, it’s been pedestrianised – and the cars are kept out with those very solid bronze rocks. It was not very busy because the day was a weekend, and The City is almost deserted then, too. Somehow, though, the magic of the name would not leave me and I had to stand and breathe the atmosphere…. This is Broadway in the rain. The bright lights are those of the Empire Theatre and the Hilton @ Times Square. We give ourselves fancy names now we are in the Computer Age. Not far from here are the famous theatres. Broadway is different from other Manhattan north/south or east/west streets because Broadway carves a swathe diagonally across Manhattan, on the map from top left to bottom right.