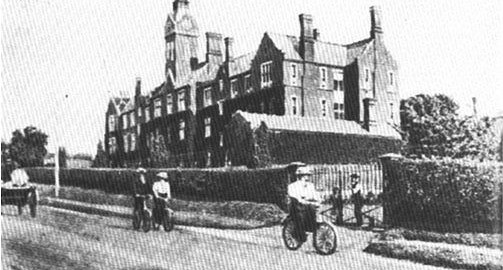 Annotated by Ewart Tearle Apr 2011.
With thanks to Pat Field, who found this document at the Hertfordshire Archives site.

The levels of poverty indicated by these spells in the workhouse is shocking. Add to this, your son is killed, in the case of Sarah nee Kefford. The pain and despair in these circumstances, is appalling. The Hatfield Union Workhouse was little more than a few motley buildings wrapped around the Hatfield Cemetery, but it still accommodated 188 inmates. There is no existing photo of it, so I have included a picture of the Hertford Union Workhouse. Notes to the marriages

Ann Tearle and Ralph Buckmaster. Ann is the sister of Mary Tearle, above. Her parents were Robert 1508 Stbg and Alice.

Alice Tearle, John Field and William Field.
Note the will of Alice Field, Hitchin 1694. Barbara noted: “Alice married William Field two years after Robert’s death. The son mentioned, Robert, was married to Joan (?) who is at the centre of our ‘Tearle mystery’. Daughters Alice, Anne, Mary and Jo(h)an married William Field( presumably the son of her stepfather, but not confirmed), Ralph Buckmaster, Stephen Axtill and John(?) Weedon respectively.”

Emma Tearle and James Paterson. Emma 1814 was the dau of William 1783 (headmaster of the Monken Hadley school) and Roseanna nee Fensom, granddaughter of Richard 1754 and Mary nee Webb.

Sarah Tearle and Richard Scrivener. Sarah 1796 Sandridge was a daughter of Richard 1754 and Mary nee Webb.

John Tearle and Lucy Thompson. John 1794 Sandridge was a son of Richard 1754 and Mary nee Webb.

Charles Tearle and Esther Munt. Charles 1798 St Albans was the son of William 1775 and Mary. Esther is his second wife. We have postulated that William was most likely a son of William 1749 and Mary nee Prentice.

Richard Tearle and Frances Maline. Richard 1800 St Albans married Frances Malme on 05 July 1825. He was a son of Richard 1754 and Mary nee Webb.

Richard Tearle and Mary Webb. Richard 1754 Stbg was the youngest son of Thomas 1709 and Mary nee Sibley. There are records of Richard being in the Sandridge militia, presumably to chase off Napoleon, should he attack England.

Watford Divisional Sessions Herts Advertiser page 7 23 August 1890
Alice Tearle. This would appear to be Alice Mary Tearle, born 1868 in Fenny Stratford, Bucks, to Thomas 1847 and Mary nee Bowler. She never married and died in Watford in 1917. Some of her family is in Watford, as can be seen in the next clipping.

Cricketers, Hitchin : Detailed illustrated profile of The Cricketers, Hitchin Pennant vol 2 part 6 page 190 1934 Apr
George Tearle was the proprietor of the Cricketers PH in Bedford Rd, Hitchin according to Kelly’s Directories of 1922 and 1933. The will of George Tearle, 41 Bedford Rd, Hitchin, who died 1941, gave his estate to Lydia Maria Tearle, his widow. Lydia Maria Wells married George Tearle 1871, of Stanbridge on 26 Dec 1896, in Chelsea, London. George was the son of William 1832 and Catharine nee Fountain. He was the brother of Jonathan 1862, and 11 other children. William famously (to me anyway) married my gg-grandmother Mary nee Andrews, nee Tearle, nee Shillingford.. Gertrude Louisa T, the blind musician and teacher, dau of Henry J T 1880 and Louisa nee Lees, stayed at the Railway Hotel and gave its address as her England address when travelling. The proprietor was Arthur James T 1902, Gertrude’s brother. This family includes Donald Stanley Tearle 1910, the Australian soldier and miner.

Herts Advertiser, 24 Jul 1915, p6 Pte. Leslie Tearle St Albans obituary 24 Jul 1915
Leslie James Tearle 1896 killed in France 11 July 1915, aged just 19yrs. He entered the 1st Btn, Herts Regiment on 3 Nov 1912 as a Territorial (serial no: 2007) and was sent to France on 11 Dec 1914. He lasted barely 6 months. We know nothing of the circumstances of his death except that he was wounded at Cuinchy on 17 Apr 1915 (gunshot wound in the eye) and killed in Cuinchy in the July. He was the son of Edward J Tearle 1869 and Emma Elizabeth nee Warner. His memorial stands outside St Peters Church, St Albans, and in the foyer of the Old Council Building, Market Sq. He received the British Medal and the Victory Medal, along with the 1914 Star. He is buried in the Woburn Abbey Cemetery, a few hundred metres from Cuinchy village. See here for details of the battlefield and existing cemeteries.

Herts Advertiser, 4 Mar 1932, p14 Reginald Frank Tearle St Albans wedding 4 Mar 1932
Reginald Frank Tearle 1908 is a Watford man who moved to St Albans and married Eleanor Godman in 1932. He was a railway porter who rose to the rank of Sgt in the RAF Volunteer Reserve, serial no: 1379571. He was killed in 1944, and has his memorial in Watford North Cemetery. I know nothing of the circumstances of his death. His parents were Frank Tom Tearle 1881 and Margaret May nee Warr. He is the g-son of Abel 1852 and Alice Gray nee Collier and g-gson of Thomas 1830 and Jane nee Draper.

Barbara has transcribed this will for us, but the identity of Thomas of Watford, shoemaker, George of Akeley, Bucks, wheelwright, bro-in-law John Tearle of the fourth Troop of His Majesty’s Life Guard and bro-in-law William of Ivinghoe are a mystery. The marriage of a Thomas Tearle to a Mary (hopefully in Watford) is also undiscovered.