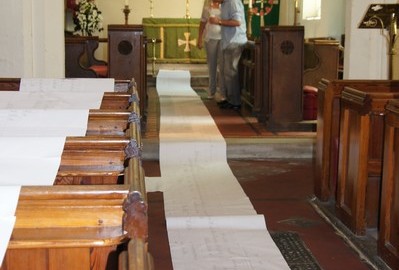 The origin, spelling and meaning of the surname Tearle
By Barbara Tearle
March 2016

Most people bearing the name Tearle in England, Australia, New Zealand and Canada today can trace their descent from a family in the village of Stanbridge near Leighton Buzzard in south Bedfordshire. Some American Tearles are also descended from Stanbridge families but there are other derivations of the name Tearle in the USA.

The evidence for the name – how it is spelt and where it originates –  comes mainly from parish registers, wills, manorial documents, court cases, deeds and census returns.

The earliest records date back to the middle of the fifteenth century, where the name was spelt Terle:

These juries were standard procedure for inquisitiones post mortem – enquiries held on the death of major landholders into their property so that the King knew what dues were owed to him.  The presence of two Terles on juries in the mid-fifteenth century shows that the family was of good status locally and that they lived in the south Bedfordshire or adjacent Buckinghamshire area.

During the remainder of the fifteenth and early sixteenth centuries a succession of John Terles (with the occasional Robert Terle) are recorded as holding property in Stanbridge and – in one instance – in Marlow, Buckinghamshire.

The family continued in Stanbridge until the name died out there in the mid twentieth century.  In the intervening centuries, it spread to nearby parishes in Bedfordshire, Buckinghamshire and Hertfordshire.  Eighteenth century and subsequent occurrences in north Buckinghamshire and Northamptonshire are almost certainly from the same family and they continue living there to this day.

The few occurrences in London in the early and mid-eighteenth century were of the goldsmith Thomas Tearle who was from Stanbridge but who appears to have had no surviving descendants and another family whose origins have not yet been traced.

During the nineteenth century the family spread from Bedfordshire to northern England (Preston and Liverpool in particular); Willesden in London as railway workers; south London by the latter half of  century; and a few elsewhere around the country.  The spread seems to have been due to seeking work; joining the military; entering the church; becoming teachers; taking to the stage as provincial touring actor/managers.

The nineteenth and twentieth centuries were also the period of emigration, with Tearle families going to the USA, Canada, Australia and New Zealand.

Tearles from other parts of the United Kingdom

In the sixteenth and seventeenth centuries, the name Tearle or Tarle appears in parish and other records well away from south Bedfordshire.

Tearles in Sussex and the south coast are variant spellings of Tourle, which is an established surname in that area.   Tearle in the West country may be a variant spelling of Terrell/Tyrrell, although there appears to be a family with the name, not merely random occurrences.  Tarle, Terle or Tarles in East Anglia, Staffordshire and London are a mystery.  There are no obvious family connections between any of them and the Bedfordshire Tearles, although of course there may be a medieval connection that has not yet been uncovered. These are research projects waiting to be explored for anyone conversant with medieval sources around the country.

A few people in nineteenth and early twentieth century English censuses recorded that they were borne in Ireland.  One or two of them were the children of the two English actor/managers (Osmond and Edmund Tearle).  Some are children of Stanbridge-descended soldiers stationed in Ireland.  Not all the Irish Tearles have yet been accounted for.

There is a Jewish family called Tearle which has no connection with the Stanbridge-descended family.  The Jewish family originated in two brothers, Isaac and Lewis, who came to England from Lithuania around 1900 and settled in the Jewish community in Liverpool, then Manchester.  It needs an expert in Jewish naming to know if that was the name they used in Lithuania or if it was adopted on arrival in England (though why would anyone in their right minds want to saddle themselves with a name that no-one can spell or pronounce?).  According to genealogical sources (FamilySearch, censuses, etc) there were Jewish migrants to USA about the same time called Terle.

The form Terle was the normal spelling until the middle of the sixteenth century when Tearle emerged.  For many decades the two forms, Terle and Tearle, were used interchangeably until Tearle gained the ascendancy during the seventeenth century.  While it is inappropriate to be too fussy about spelling (our ancestors weren’t), in this instance the older spelling and the change to the current one are worth noting. The best explanation may lie in other spelling changes of the sixteenth century. For example, during the same period the spelling yere was giving way to yeare and erth to earth.  What more natural for scribes to apply this model and write Tearle for Terle?

At the same time as this standard change was taking place, there were many other ways of spelling the name, probably explained by local pronunciation and phonetic spelling.  Those variations for the Stanbridge-descended Tearles in the Bedfordshire, Buckinghamshire, Hertfordshire and Northamptonshire area include:

Surnames were adopted over a period of several centuries during the middle ages, stabilising into hereditary names sometime later.  In order to have a chance of determining the probable derivation and meaning of a surname, its earliest occurrence must be sought because it will be nearest to the original use and reason for adoption.

Few surname dictionaries include Tearle.  Henry Harrison in his Surnames of the United Kingdom gives a derivation from old English þearl meaning strict or severe.  This may be based on the similarity in spelling.  Barber’s more recent British Family names – their origin and meaning explains it as being from the Dutch personal name Terlet.  Given the late emergence of the spelling Tearle and the earlier spelling as Terle, the þearl explanation does not hold up to scrutiny.  Its origin should be sought in an earlier period.

What did Terle mean?  Where did it come from?

I can offer no explanation.  However a project which is examining the surnames of the United Kingdom may add something to this account and enable a stab to be made at its meaning.  The project is called FaNUK – Family names of the United Kingdom. It is based at the University of the West of England and the results of its work are scheduled for publication in 2017.  They will be published as an online database and as a new surname dictionary by Oxford University Press, Dictionary of Family Names in Britain and Ireland.  I look forward to seeing it and finding out whether it can shed light on Tearle and similar sounding names – Dearle, Hearle, Learle and Thearle.