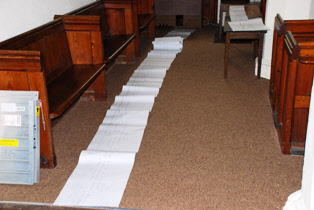 The highlight of the whole day has to be the huge distances people had come to be there. We had families from Australia and Canada, Rugby and Southampton – and everywhere in between. When we set off to the 5 Bells pub in Stanbridge for lunch, we had 50.

Here are the Canadians – mother Sheila Rodaway (on right of the picture) and daughters Sharon Mallette and Diane Hill. Incredibly, they were on the Thomas 1737 branch and as descendants of Jabez, they were closely related to John L Tearle the author. Somehow a TearleMeet is not complete without Jennie Pugh, but today’s Meet was extra special for her, because it marked the reunion of the Wing Tearles. Jennie is descended from Levi, the blacksmith of Wing and Alan Gibbs is descended from his brother Amos. For many years, Amos was the blacksmith’s assistant. Jennie and Alan  swapped stories and memories of Wing for a long time.

We had a little attendance book and Barbara volunteered to be hostess and ensure everyone signed it. Here she is overseeing brother Richard while he does the honours. Elaine had brought Jennie Pugh from Luton and she is lining up to sign as well.

Here  is half the Australian attendance on the day. Helen Manning nee Tearle and family are examining the John 1741 branch to see from where on the branch they descend. A charming family, they involved themselves fully all day in the ongoing activities. We also had a visit from the Soulbury Tearles. Here they are, right, studying at lunch. I told them the story of Norman Lawrence Cooper, an ex-villager and still an owner of ancient Stanbridge land, gave us a presentation on Victorian Stanbridge using his collection of postcards and photos.

In the picture are Helen Manning, Susan and Allan, Pat Field, Alan Gibbs and Ray Reese from Australia, watching the presentation.

For a small branch, William 1749 was well represented. Here are Peter and Viv Rolfe, examining the printout.

Alan Manning and I, swap stories. He was keen to take with him Lawrence’s presentation so that his family could be reminded of their fabulous day in Stanbridge. In the picture above is the Joseph 1737 branch of the tree. At the last Meet in 2006 the whole tree fitted here, a testament to the hard work of all its contributors. Joseph 1737 branch of the tree

The First Meet of 2006 was a hard act to follow: this, the Second Meet of 2008 will be even harder. The day, for me, began at 6.45 with the arrival – on time – of a taxi to take me to the station. The clouds were low, dark and threatening and, sure enough, by the time I boarded the train, it was raining quite heavily. But no amount of rain was going to dampen my spirits: too much planning, so many e-mails flying back and forth and so much anticipation were not going to be spoiled by a few drops of rain! By Milton Keynes it had almost stopped and blue skies appeared to the East: Leighton Buzzard saw the first sunshine of the day and by the time I arrived at Stanbridge, the weather looked very promising indeed.

Ewart, Elaine, Barbara and Laurence – the Churchwarden – were already there when I entered the Church of St John at around 9-15.  I thought my early arrival might enable me to contribute something to the preparation of the event: not so – it had already been done! Barbara was acting as hostess and I signed a Visitor’s Book that Ewart had provided – evidence of a lesson learned from last time. I was also able to place my lunch order as copies of the menu were available. Another excellent idea.

Please don’t ask me in which order people arrived: the Visitor’s Book would only prove my memory to be a lie, but I recall that Pat and John Field were there early as were Ray and Denise Reese with Alan and Helen Manning and daughter Susan. At this point I began to realise the importance of the event: Ray’s party were from Australia having timed their holiday, I believe, to enable them to attend! And when Charlotte from Ottawa and Sheila (also from the Southern Hemisphere) arrived I knew we had something special. Steadily, more and more people arrived – Jo, Ingrid, Tracy, Joan, Alan Gibbs, David, Paul and others.

I had brought along some of my Godfrey memorabilia as well as The Bottle which caused both amusement and interest from those who had not seen it before. There, I thought, it exists! Barbara had brought along a folder containing descriptions and many prints of Thomas Tearle the silversmith’s work. A beautiful catalogue which drew admiration from so many.

Ewart, of course, had done so much. Prints of the layout of the Churchyard, envelopes for the afternoon’s project, flyers containing all of our website addresses and the provision of a scanner/copier – no stone was left unturned. The Trees were laid out on pews, but two of them had to be laid out on the floor as they were too big.

Mid morning, and Laurence began his slideshow of Old Stanbridge. By this time, the sun was shining brightly and warmly and most of us were equipped with coffee or tea (supplied by Ewart) and Elaine’s delicious melt-in-the-mouth shortbread. Thanks, too, to John Field for facilitating that morning tea. Thanks, here, to Laurence for a most interesting display and commentary on village life.

More people arrived, including Jennie Pugh, our star guest from 2006. Despite recovering from a recent, minor, operation, Jennie was delightful and very definitely ‘on form’. Although 93, she has promised to be at the next Meet!

Now, here’s a story for you. On  Thursday night I received an e-mail from Christine who had been sent a clipping from the LB Observer advertising the event: she outlined her connection and hoped to be there. On Friday night, I received another e-mail from Joan saying she and Jenny Fellowes would be attending and reiterated her connection through the Soulbury line. So, there was Joan and Jenny and their cousin Christine who had not seen each other for 40 years!

Ian, his uncle David, cousin Stephen and their respective families arrived and were immediately enthusiastically studying the various trees, tying up what they had with what we had. This was good stuff – it is what it is all about!

Incredibly swiftly, lunch time arrived, but not before we were visited by the Rev Janet Spicer who commented, (somewhat ruefully?) that ‘she had a congregation’. We were able to fulfil our promise that ’50 for lunch’ had been promised to the 5 Bells – exactly 50 it was, according to a swift head count. We were looked after by the staff there and despite a couple of hiccups (not being caused by the food, I should add!), all went well. Ewart gave a short speech and an explanation of his plans for the afternoon. It must be said that Ewart played down his role, both for the day and his maintenance of The Tree: Barbara quite rightly, stood up and thanked him and reminded us all of the tremendous amount of work he puts in to that ‘maintenance’ and  the huge debt of gratitude that we all owe him. Hear, hear.

After lunch, I sat in the garden for a while, bathed by warm sunshine talking to David.  David’s nephew Ian seems to be the prime mover in the research side for that branch, but all of that family have a great interest. David, it turned out, is the brother of Alf Tearle, who was mentioned in despatches during WWII. Another heart-warming moment. Timetables and schedules precluded me from taking part in the activities Ewart had planned and, following some long goodbyes, Elaine kindly took me to LB station and I began a long and wearying journey home – but that’s another story!!

To close, I would like to apologise to anyone I have missed in the above, or have written incorrect details about. Above all, I must once again express my deepest gratitude to Ewart, Elaine, Barbara, Pat and Laurence and everyone who freely gave their time and support whether or not they were able to attend. Finally, to all who did attend, but – and I trust you will understand – especially to our overseas visitors who not only came but also must have brought their native sunshine with them!!!