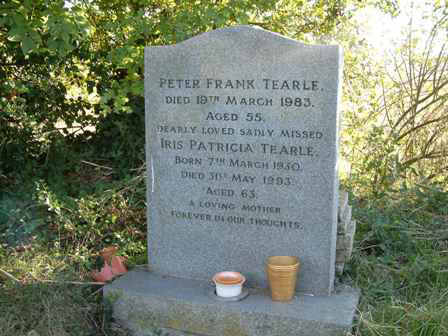 This headstone belongs to Peter Frank 1927 of Edlesbrough. He married Iris Patricia Galpin in Luton in 1948. His father was Frank 1898 of Eaton Bray who married Selina Gore in 1921. His grandfather was George 1861 Edles and his g-grandparents were George 1831 EB and Hannah Maria nee Janes. George’s parents were Jabez 1792 of Northall  and Mary nee Green and that means Peter is on the branch William 1749 (and Mary nee Prentice). Frank was the brother of Jeffery 1891 EB who was killed in France in 1914. This makes Peter Jeffery’s nephew.