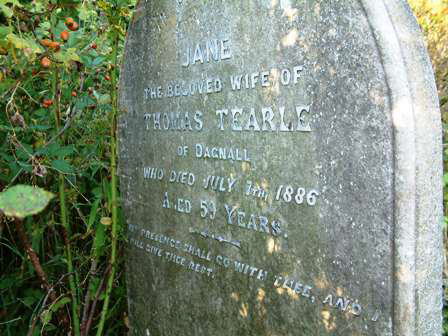 This is the headstone of Jane nee Draper, wife of Thomas born 30 Sept 1830 in Dagnall. Edlesborough and Dagnall are very close together. After Jane died, Thomas married Bethia Smith and moved to Dunstable, where he died in 1909. Thomas is on the branch of Thomas 1737

This is another story of the grandchildren of Fanny Tearle. Her son, Abel 1797 of Edlesborough, married Hannah Frost of Tilsworth, near (very near) Stanbridge. Hannah died in 1839 and you can see Abel with his second wife, Ann Jones, living in Dagnall in the 1841 census. Abel and Hannah’s son Thomas b1830 in Dagnall, is not living with Abel and Ann because he is staying and working (Man Servant) at the house of Benjamin and Charlotte Johnson, farmer at Church End, Totternhoe.

1841 = Thomas 1830 (not born Beds) in the house of Benjamin Johnson in Totternhoe. This Benjamin Johnson (b1816) is Fanny’s son by her second husband, William Johnson of Northall. Benjamin went on to become a Morman and his family moved to Utah after his death.

In 1848 Thomas married Jane Draper and this is how I first became interested in this family. Elaine and I went to Edlesborough to have a look at St Mary’s, Edlesborough. We found the headstone (above) for Jane, the beloved wife of Thomas Tearle of Dagnall, who died in 1886, at 59 years. We wondered who they were. Thomas must have been pretty successful, because a headstone was expensive, and one this size even more so. We were entranced by the deep love expressed by the memorial and the erudition of its sentiment.

I found the story of Abel, Hannah and Ann, as well as Thomas and Jane, in the censuses from 1841 to 1901, and from them the connection of Thomas and Jane to the rest of the Tearle family. Thomas followed in Abel’s footsteps as a maltster; he was the head brewer for James Batchelar in Dagnall and must have been good at it. Calling himself Thomas Tearle of Dagnall is in itself a statement of self-confidence. The 1861 census is the best picture of this family and you can see that the names of the first three children – Susannah, Abel and Fanny – do help to add substance to the story that Fanny 1770 was a child of Thomas 1737 and Susannah nee Attwell. It would certainly suggest that this family was close to Thomas and Susannah.

The 1871 census shows that Jane’s father, who is living with them at the time, was Abraham Draper of Little Gadsden, Herts. She was a lady of great heart, because her father spent his last years as an “Imbicile with age.”

Thomas married Bethia Smith from Pitstone (near Ivinghoe) in 1888 after Jane died. Thomas is buried with Bethia in Dunstable; I think the one at Priory Church, but possibly the Dunstable public – I haven’t found the memorial yet. I think that Thomas intended to be buried with Jane, hence the room left on the memorial, but events did not work out that way, it seems. It is also worth noting that Thomas is the brother of Susanna Tearle 1827.