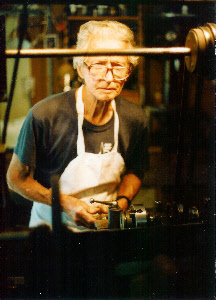 Here is the obituary I wrote for my father, who died a few months after Mum:

It is a source of great sadness to me that I should have to speak to you about my father so soon after farewelling my mother.  I had hoped to be able to speak with him and to write to him for some time yet. I shall miss him. There is no-one in the world who has had such an influence on me and on my life as Dad has. “If it’s worth doing, it’s worth doing well.” My dad’s life and my dad’s guiding principle in a single sentence. There is only one way of doing something – do it right the first time, do it right every time. It didn’t matter if he was doing a small job on a model motor, or whether he was working on another project on his house, he approached every job with the same serious concentration, meticulous planning and careful execution. I have stood for hours and talked with him while he worked at his lathe and made those beautiful boats and engines for which he is justifiably famous.

I can remember many nights on the porch in Western Heights watching him work his magic on a small piece of metal, a magic I longed to weave, but had no gift for at all. I always felt close to him when I stood there and watched him work. Frank Tearle at his lathe, Hahei.

Here in Hahei, Dad made a boat for Jason and we all went down to the little stream at the end of the Hahei beach to watch this delicate little steam engine drive Jason’s new boat and to marvel at the intricacies of the remote control mechanism by which it was steered. Jason absolutely loved it and promptly christened it Genevieve, in honour of his sister. This boat is now a lovely and graceful monument to Dad’s beautiful grandson. One of the very best portraits I have taken is a photo of Dad, in his workshop in Hahei, looking over his lathe at me while he worked. I am proud of it, and he thought it was pretty good, too.

I remember a few things very vividly from my childhood about Dad. The first thing was that he knew everything. There was no subject brought up at the table – and we had dinner as a family every day – that he couldn’t teach us things about. While he wasn’t very educated, he always read very widely and thus he was very knowledgeable. No man I have ever met, then or since, was as knowledgeable as Dad.

He always had a vegetable garden. He could never see any reason for growing flowers, but he had the biggest vege garden that would fit onto any back lawn he was allowed dig up. And he grew the most beautiful vegetables; fat potatoes, huge and perfect carrots, beetroot, parsnips, cabbages, cauliflowers, rhubarb and in Rotorua he had this 15 feet high trellis for the chinese gooseberries, as they were called then, right at the front of the garden. They are called kiwifruit now. He had a thing about the soil in Rotorua being too porous and he wanted lots of organic material in the soil to give it some body and retain the water properly. He dug in people’s old hay and he grew lupines and dug them in, too.

I went with him one afternoon to a fishmonger in Rotorua whose freezers had failed overnight and after Dad had fixed the freezers, the man gave him the contents; some sharks, barracudas, groupers, mostly big fish, which Dad heaved onto the back of the truck. When he got home, he dug some trenches through the garden and dumped these fish into the trenches. For years we dug up fish scales. It took the neighbour fully five years to get to know Dad well enough to ask him the burning question, “What were you trying to grow when you sowed the fish?” Dad wasn’t a big man – I suppose five feet eight – but he always had physical jobs and so kept very fit. You know he built his mother’s house in Haumoana when he was only 15, don’t you? In Hyla Rd. It was originally a shed on a section his mother bought with £100 her brother sent her. Levi Tearle, her father-in-law sent her £80 and with that she dug a well. The house Dad built is still there and the well is still there. He left school and went to work for an apiarist, so he knew a lot about bees and how different honeys are made. Then he went to work for a builder and during World War II he was building houses in Wellington.

He wasn’t allowed into the army because he had had rheumatic fever as a boy and it had left his heart with an irregular beat. He had also had mumps at fifteen and that left him deaf in one ear. He met Mum in Wellington and after they were married he had work as a builder in Whakatane, a farmer in Te Aroha, a refrigeration engineer and a joiner/fitter in Rotorua so he knew his way around wood and metal. That’s well documented – everyone here will know what a lovely job he made of building his own house in Hahei and how talented he was with his lathe – what you may not know is how unbelievably strong he was.

He and Mum used to gather strays and one of them was a lady called Marlene and her boyfriend. Now, he was a weightlifter, bigger than Dad, with muscles on muscles that he liked to display. One day he and Dad replaced the big ends on this chap’s car, filled the motor with oil and tried to start the car. The starter motor did nothing, just growled, so Marlene’s boyfriend took the crank handle and gave the starter motor a hand. Still nothing. I can see him in his singlet, sweating in the warm autumn sun, muscles bulging as he strained to turn the motor over. Still nothing. “I’ll have a go,” said Dad, stepped forward, set his feet, grabbed the crank handle in both hands, and turned it over, just like that. But the motor hadn’t made a sound. Dad pulled the crank out of the hole and we saw that he had made a very tidy 360-degree worm in the middle of the crank handle. “You don’t have to have lots of muscles to be strong, you know,” he murmured to me later. The third thing that stands out so powerfully about my dad is that he was so generous. He gave so willingly of his time and of his patience and of his considerable talents. He was kind, outgoing and friendly. You know all the work he did here in Hahei for the fire brigade and for his local water supply. You know that he did the work only because it needed to be done; he never asked for recognition and he never asked for pay. He did the work because one day he put his hand up and said, “I can do that,” and he did, not just for that day, but for years and years and years. My dad didn’t do things by halves; if a job’s worth doing, it’s worth doing well.

When you think of him today, think of his family here in England also grieving for a lost cousin and friend. He was very, very moved when they came to see him and to correspond with him over these past few years. Thelma Shepherd, Sheila Leng, John Wallace, Jenny Pugh, Norah Lowe, Ivor and Iris Adams and lastly Roland Adams, his cousin who sent him his first lathe in about 1930 – the very one he worked his magic on for me, for his model motors and for the people in Hahei. I have spoken to all his English family, many more than just the list above, and each of them wishes to send you their heartfelt greetings and their deepest sympathy. Is it too much to say that for all my life Dad has been my hero, the one person I never wanted to let down, the one man I always hoped would be proud of what I do? I shall miss him. I shall miss his presence in the back of my mind as I walk around London and get to know the world so familiar to his parents, composing the letter that I write to him each month about what I have seen and what I have discovered. I shall really, really miss him.